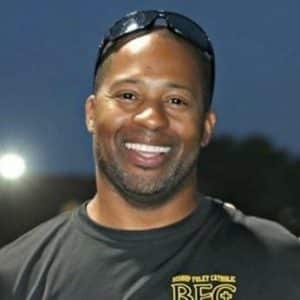 Karl Taylor’s love for Hillsdale has extended far beyond his college years. A 1993 graduate, he served as the captain of the football team and as president of Delta Sigma Phi fraternity, and he earned a degree in finance.

After graduating, Karl would often visit Hillsdale for Homecoming and other events. Some of his college friends had joined the Alumni Board and, knowing his enduring love for the College and its principles, encouraged him to join.

“I remembered how much I benefitted from my Hillsdale education. It gave me friendships, knowledge, a professional network, and helped me grow as a person,” Karl shares. “I decided to join the board because I saw that I could give back to this school that gave so much to me.”

Another way Karl gives back is by hosting the Honor Roll Showcase Camp every summer to help Hillsdale recruit extraordinary student-athletes. Karl coached football at a local school near Detroit and, after joining Hillsdale’s Alumni Board, realized that he could not only benefit the boys he coached but also Hillsdale College. He had a conversation with Hillsdale’s Admissions Office and discovered how difficult it was for Hillsdale to find skilled athletes that could handle the College’s academic caliber. So, he created the Honor Roll Showcase Camp, which brings Michigan athletes who meet the College’s admissions criteria to Hillsdale for a football training and recruiting camp.

“It allows student-athletes to see what Hillsdale has to offer and allows our coaches to develop personal relationships with promising athletes,” Karl says. This camp has helped Hillsdale’s football team recruit numerous student-athletes, some of whom would not have been on Hillsdale’s radar had they not attended the showcase. It has been so successful in past years that recruiters from 30 other colleges now attend to see the talent that Karl has brought together. “Next year, we’re hoping to have multiple sessions instead of just one.” This would grant even more athletes the opportunity to interact with a great network of colleges, including Hillsdale.

Karl thinks Hillsdale is a particularly special place for student-athletes. “My life has progressed the way it has because of the way I grew at Hillsdale.” He mentions that the small campus allows professors and coaches to come alongside students and mentor them. He says the mentors he found at Hillsdale helped him to “grow as a leader, build my confidence to perform on the field, and give my all, not just in football, but also in my academics.”

Written by Meghan Barnes If you had to drink only Maxwell House or Folgers for the rest of your life, I bet you’d just quit ... Read More

Why I Chose Hillsdale: Luke Hollister

When the snow falls in Hillsdale, it never fails to fill me with wonder: a single, particular snowflake is released from the clouds and then ... Read More

Let It Go: How an Art Elective Taught a Senior to See the World Differently

Written by Sophia Klomparens I haven’t taken a class in the Fine Arts Building since freshman year, and it shows. I’m unusually nervous as I ... Read More

A Guy Earned More $35,000 Per Month After Install FlatNews Design for His News Website, SHOCK?!

Why Should You Use FlatNews to Start a Perfect Game Review Website?